"Pinned Down" by wind, again

Mike MacFerrin just called using satellite phone. They are stuck in their tent, again, "pinned down" by strong wind and blowing snow above eye level. 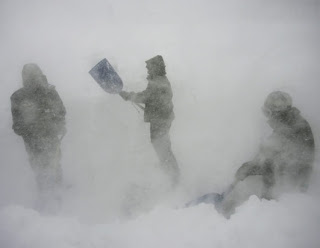 To make the most of being stuck they managed yesterday to drill a core. And Mike has been busy gathering radar profiles by driving distances on the snowmobile.

Two days ago there strongholds tent was blown-in on one side by strong winds. Today, that tent is in its normal shape. They had average 30 knot winds during the phone call.

The weather has been making their work unusually difficult. Mike estimated only 3-4 days calm weather out of 21 days. Yesterday, after spending the time to get the sleds ready for traverse, the wind came up and they got into another hold pattern. Mike estimates that at least half of the plans were forced to change because of weather. So, the word "frustrating" came up more than once in the conversation.

The relatively low temperatures have been taking a toll on the group. Yesterday, after a trip to the 'yellow point', two of the party spent the rest of the day just warming themselves back up. The group was having a laugh about one of the party who was eating coconut butter straight from the can.

I could clearly hear the flapping of the tents over the satellite phone. I do not remember that experience. Although in my past experience, I was not on the comfortable end of the phone.

I have been looking at satellite derived service reflectivity data from recent days and clearly they are getting more snow and so the snow drought has come to an end now. The timing for winter to return after a warm dry spell is the opposite of fortuitous.